Pig Farming Out, Casinos In 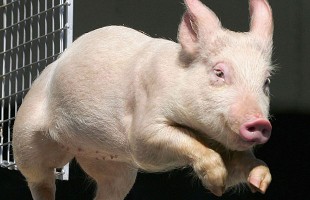 Billionaire casino magnate Sheldon Adelson — a top Republican donor who could boost Gov. Chris Christie's potential presidential campaign — said he'd be interested in building a casino in the Meadowlands if the state allows gambling to expand, according to a report by the Associated Press. Especially now that Secaucus no longer has pig farms.

Adelson, 81, was the keynote speaker at the Global Gaming Expo in Las Vegas on Wednesday night and told the crowd of his memories of Secaucus when he was a member of the U.S. Army more than 50 years ago. "It used to rain the odor of pig farms on the Meadowlands," Adelson said, according to the report. "When I was stationed on Governor's Island in New York City, I could smell Secaucus. We don't have that anymore, so that would be a very attractive place to build."

"Look, it's a two-edged sword," Adelson said, according to the report. "If you go (to the Meadowlands) and spent a lot of money, then you may wake up one day and (New York Gov. Andrew) Cuomo or whoever is governor or mayor of New York City will say, 'Look, they're taking all the New Yorkers' money and they're sucking it up in that casino in the Meadowlands.We gotta open in New York and keep the money in New York."

New York has five tribal-run casinos, nine racetracks with slot gambling, and four new casinos heading to the upstate region, though none are in New York City. And while the state established a seven-year moratorium on new casinos last year, more could come after that. New Jersey currently bans casinos anywhere other than Atlantic City. But north Jersey lawmakers and members of the horse racing industry have long considered whether to amend the state constitution to allow for expansion — an effort that has been fought off by Atlantic City officials and south Jersey lawmakers. Online casino gambling in New Jersey is legal.

Talk of expansion, though, has heightened in recent years with Atlantic City struggling through a financial tailspin. Four of the city's 12 casinos have closed this year, taking thousands of jobs with them. State Senate President Stephen Sweeney (D-Gloucester), a south Jersey politician, said in July he'd be open to allowing voters to decide whether to allow for a north Jersey casino — as long as part of the profits help Atlantic City. Last month, Christie said the concept of allowing casinos in north Jersey remains "on the table," though he added that such conversations are far off. A spokesman from Christie's office did not immediately return a message seeking comment.