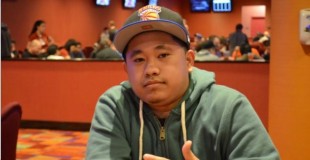 New Jersey poker player Justin Wong is hopeful of a boom in the Garden State where online poker is legal.  Sites like Resorts and PartyPoker have seen record revenues last month.

"I'm a 26-year-old accountant from New Jersey," Wong stated. "I got into poker during the summer of 2004 by playing friendly $5 and $10 buy-in sit-n-gos. Then I played in a friendly league in high school, where a buddy of mine hosted a series of small multi-table tournaments, where we played for lunch money. I didn't take the game as seriously back then, but I was hooked on the competitive aspect from the start. It wasn't until 2012 that I decided to take the game seriously, and make an effort into studying and improving my game.

"I then began to grind live cash games part time while attending Rutgers Business School. After having difficulty landing a job straight out of college, I decided to take a year off and play poker full time. This was right around the time online poker became regulated in New Jersey. Although I did well for myself in 2014, I was able to land a full-time job the following year, and decided to put my college degree to use. While working a full-time job during the day, I still manage to play online poker five nights a week."